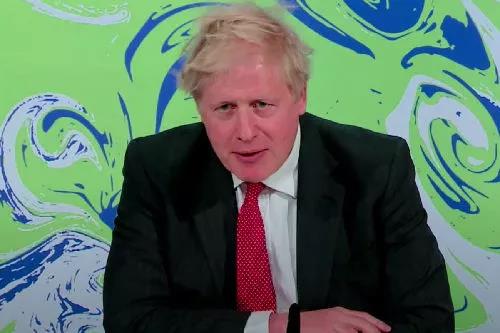 Thank you very much, Antonio and Your Excellencies, colleagues, friends.

I’d like to begin by thanking President Biden very much for bringing us together today in the way that he has and for setting out the problem in the eloquent way that he did at the beginning, and of course for returning the United States to the front rank of the fight against climate change.

And I’m…I’m really thrilled by the game-changing announcement that Joe Biden has…has just made. And I’m very proud that the UK is doing the same.

We were first country to pass legislation for net zero. We have the biggest offshore wind capacity, still I think, of any country in the world, the Saudi Arabia of wind as I never tire of saying. We’re halfway to…to net zero.

We have carbon emissions lower than at any point since the…the 19th century, we’re ending support for fossil fuels overseas and doubling our international climate finance.

And we’re actually speeding up because we see the obligations, as colleagues have just pointed out, for developed countries to do more, we’re legislating to deliver 78% of the reductions needed to reach that goal by 2035.

And as host of COP26, we want to see similar ambitions around the world and we’re working with everybody, from the smallest nations to the biggest emitters to secure commitments that will keep change to within 1.5 degrees.

And I think we can do it. And to do it, we need the scientists and all of our countries to work together to produce the technological solutions that humanity is going to need. Whether it’s carbon capture and storage or solving the problems of cheap hydrogen delivery or getting to jet zero flying, getting to net zero flying, making sure that we can really roll out EVs properly, making sure that our homes stop emitting such prodigious quantities of CO2, moving to sustainable domestic living.

We can do this together across the world. And it’s going to mean the richest nations coming together and exceeding the $100 billion commitment that they already made in 2009 and I stress how important that is.

Plus, and I…I…I think what President Xi had to say about the harmony with nature was absolutely vital. If we’re going to tackle climate change sustainably, we have to deal with the disaster of habitat loss and species loss across our planet and we want to see more examples of government and private industry working hand in hand as with the newly launched LEAF Coalition to reduce deforestation and the multi-trillion-dollar Glasgow Financial Alliance for Net Zero.

And…and to do these things, we’ve got to be constantly original and optimistic about new technology and new solutions whether that’s super-resistant crops…crops that are super-resistant to drought or more accurate weather forecasts like those we hope to see from the…the UK’s new Met Office 1.2 billion-pound supercomputer that we’re investing in.

I…I’m not saying any of this is going…is going to be easy. There is obviously going to be a political challenge. I think it’s very important to go back to the…the original words of President Biden, because it’s vital for all of us to show that this is not all about some expensive politically correct green act of…of…of…of…of ‘bunny hugging’ or however you want to put it. Nothing wrong with ‘bunny hugging,’ but you…you know what I’m driving at, friends and colleagues.

This is about growth and jobs, and I think the President was absolutely right to…to stress that. And I want to leave you with the thought that we can build back better from this pandemic by building back greener.

Don’t forget that the UK has been able to cut our own CO2 emissions by about 42% on 1990 levels and we’ve seen our economy grow by 73%, you can do both at once. Cake have eat is my message to you.

So let’s…let’s work together on this. Let’s go to Kunming in October and then Glasgow in November, armed with ambitious targets and the plans required to meet them.

And let’s use this extraordinary moment and the incredible technology that we’re working on to make this decade the moment of decisive change in the fight against climate change and let’s do it together.

Thank you very much.