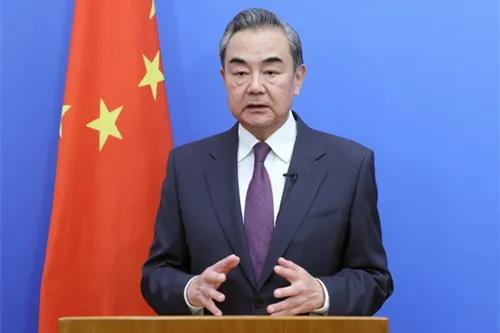 I am on a visit to Europe at this moment, and I am very glad to join you by video. At the outset, I wish to thank President Raisi and the Iranian government for the high importance they place on hosting the second Meeting of Foreign Ministers of the Neighboring Countries of Afghanistan. I also want to thank Foreign Minister Amir-Abdollahian for the thoughtful arrangements. I look forward to a productive meeting.

The first Foreign Ministers’ Meeting held this past September was a creative move. We officially launched the mechanism of coordination and cooperation among Afghanistan’s neighboring countries, and issued a Joint Statement covering a broad range of issues. We established the political consensus to work together to address the changes in the Afghan situation, demonstrated our unique role as Afghanistan’s neighbors, and made clear our reasonable concerns. The meeting received considerable attention from the international community. I am ready to work with you all to build on the first foreign ministers’ meeting, enhance our strengths, uniqueness and cooperation as Afghanistan’s neighbors so as to help ensure lasting peace and stability of Afghanistan.

Afghanistan is at a crucial stage of shifting from turbulence to order. The country faces both challenges and opportunities, and difficulties and hopes. As its neighbors, we all hope to see Afghanistan enjoy peace, stability, economic development, ethnic harmony and good-neighborliness. Recently, the international community has also expressed expectations and concerns over the evolution of the Afghan situation, including through the Moscow Format meeting last week.

I just had a meeting in Doha with senior Taliban members of Afghanistan. I had a deep-going exchange of views with them. Meanwhile, I expressed our shared concerns as neighbors over Afghanistan. The Taliban stated that they take seriously the calls of the international community, especially Afghanistan’s neighbors, and that they will take further positive steps in domestic and foreign policies. They also talked about some practical difficulties in developing the economy, improving people’s livelihood and governing the country, and they hope to get external assistance and support. My overall impression is that the Taliban is eager to have dialogue and cooperation with the outside, and that they are serious about this.

Under the new circumstances, we need to, on the basis of respecting Afghanistan’s sovereignty, independence and territorial integrity and keeping to the “Afghan-led, Afghan-owned” principle, step up coordination and cooperation on Afghanistan-related issues for the purpose of replacing chaos with stability, preventing security spillovers, and helping the country embark on a path toward good governance. To this end, China proposes that we give priority to our cooperation as follows:

First, making active engagement and showing guidance. We should attach importance to the opportunity that the Afghan interim government is adaptable and shapable, and get in touch and talk with it in a rational and pragmatic way to increase mutual trust and exert positive influence. We need to encourage Afghanistan to take a broad-based and inclusive political stance, adopt moderate and prudent domestic and foreign policies, and protect the basic rights and interests of ethnic minorities, women and children. Meanwhile, we need to encourage it to resolutely fight terrorism and pursue good-neighborliness, friendship and cooperation. It is natural for neighbors to have some differences. But neither stand-off nor confrontation provides a sustainable solution. The right way is to be forward-looking, accommodate each other’s reasonable concerns, and seek co-existence in peace.

Second, expanding multilateral coordination. We need to increase mutual reinforcement and build synergy between the various mechanisms on Afghanistan, and support the United Nations as a key coordinator in such fields as maintaining stability, preventing chaos, and providing emergency assistance. We should urge the United States and other Western countries to take up their primary responsibility in helping Afghanistan emerge from hardship to vitality. Among many others, they should at present lift unilateral sanctions on Afghanistan for its state assets to be used to meet people’s urgent needs as soon as possible. The World Health Organization also needs to step up coordination and provide more vaccines, medical supplies and protective gears for Afghanistan to control the spread of COVID-19 at an early date.

Third, strengthening counter-terrorism cooperation. Not only do we need to encourage the new Afghan authority to make a clean break with terrorist forces, we also need to support it in independently, resolutely and effectively combating all extremist and terrorist organizations including ISIL and the ETIM. We need to positively consider holding bilateral and multilateral counter-terrorism dialogues and cooperation with Afghanistan at an appropriate time. And we need to forge a united front against terrorism through multilateral platforms such as the UN and the Shanghai Cooperation Organization.

Fourth, promoting peace and reconstruction. Afghanistan is in need of revival on all fronts, and development is the top priority. Only by finding a development path suited to its national conditions at an early date and integrating itself into the regional development architecture, can there be a basis to address the various challenges facing Afghanistan. As its neighbors, we need to take coordinated and robust actions to steadily increase economic and trade exchange with Afghanistan, explore infrastructure connectivity, and help Afghanistan take part in Belt and Road cooperation. The World Bank and the International Monetary Fund also need to consider how to resume financing support to Afghanistan, with a view to helping the country embark on a path of sound development.

As a responsible major country and Afghanistan’s neighbor, China has all along been playing a constructive role on the Afghanistan issue. At the first foreign ministers’ meeting, China announced 200 million RMB yuan worth of emergency humanitarian assistance to Afghanistan. The first batch of supplies has arrived at Kabul and the delivery of the remaining is well underway. China will continue to provide support and help to the Afghan people to the best of its capability.

To build on the consensus from the two foreign ministers’ meetings and make this mechanism more productive, China is ready to host the third foreign ministers’ meeting at an appropriate time. We will keep in touch with all sides through diplomatic channels. And you are most welcome to take an active part in it. We propose launching as soon as possible the two meeting mechanisms, the special envoys/representatives for the Afghan issue and representatives of embassies in Kabul, to follow through on the consensus of this meeting and push forward specific work through consultation.

China will work with all sides to promote the sound and sustained progress of the coordination and cooperation mechanism among neighbors of Afghanistan, and play a positive role in helping the Afghan people realize a safe, secure, and happy life and achieve peace and development at an early date.