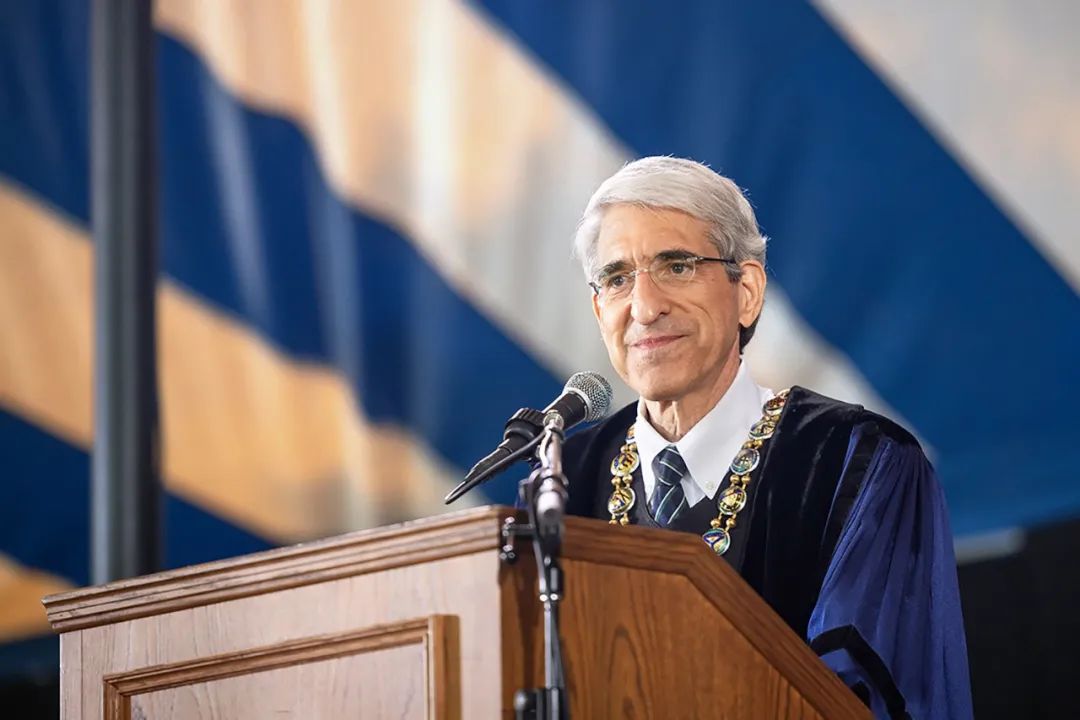 Graduates of the Class of 2022, family members, friends, and colleagues. Before I get started, I want to mention that this is the last baccalaureate at least in his present role for your Dean, Marvin Chun, before he returns to the faculty. And I’m wondering if we could all show him just a little bit of gratitude for his service these last five years. He’s not going far away.

So it is a special pleasure to be here with you today, a day made doubly meaningful by our ability to celebrate our graduates in person. And I am delighted to welcome you to Yale’s first on-campus Baccalaureate ceremony since the start of the COVID-19 pandemic.

And after a three-year hiatus, there is a wonderful Yale tradition that I would like to reinstitute:

May I ask all the families and friends here today to rise and recognize the outstanding – and graduating – members of the Class of 2022?

Thank you! And now, may I ask the Class of 2022 to consider all those who have supported your arrival at this milestone, and to please rise and recognize them?

Our excitement today is tempered by global turbulence. We can see the perils of conflict and crisis around the world. And yet, as I look out onto this courtyard, I can also see the promise of those well prepared to better our collective future. Old Campus is filled anew with the boundless potential of graduates who offer cause for hope.

Throughout the country on this weekend and those weekends surrounding it, presidents of colleges and universities are inspiring their graduating seniors by telling them that they have received the very best education possible, and that as educated adults, they are now ready to go out and make the world a better place. This is, of course, true in many respects, and I have certainly spoken on other Commencement weekends of the importance of improving the world for this and future generations.

But I would like you, graduating seniors from Yale College, to depart from this place with a somewhat different mindset. I am going to urge you to recognize that your excellent education allows you to listen to others carefully, consider what they have to say, and sometimes come to a new point of view. I am suggesting today – a day filled with the pride of accomplishment – to recognize, at the same time, the value of intellectual humility. Today, I wish to focus on the courage to acknowledge all we do not know, to admit when we are wrong, and to change our minds.

Sixty years ago, President John F. Kennedy spoke to a capacity audience seated right where you are now. He saw a similar state of unrest as the specter of war loomed. And I suspect he gained a similar sense of optimism atop this platform from members of the Class of 1962. President Kennedy’s historic Commencement address at Yale was sweeping in its rhetoric and its scope. And more than a-half century later, there is still much for us to heed from his message, including the abiding but now especially relevant value of seeking new perspectives.

“Too often,” President Kennedy told the graduates in a rousing appeal for intellectual humility, “Too often, we subject all facts to a prefabricated set of interpretations.” “Too often,” he continued, “we enjoy the comfort of opinion without the discomfort of thought.” History teaches us the grave hazard of certitude and the hubris from which it germinates.

Now, when I was a graduate student here, Professor Irving Janis, a social psychologist, was one of my teachers. He formulated the concept of groupthink and linked the suppression of dissent to a series of foreign policy debacles such as the escalation of the Vietnam War and the Bay of Pigs invasion.

The Bay of Pigs invasion – a decision by Kennedy to have the CIA lead a group of armed Cuban exiles in a failed attempt to overthrow Fidel Castro – was described by Kennedy aide Arthur Schlesinger as rooted in a “curious atmosphere of assumed consensus, [in which] not one spoke against it.” And as President Kennedy himself disclosed to TIME magazine, “there were 50 or so of us, presumably the most experienced and smartest people we could get, to plan such an operation. Most of us thought it would work…I wasn’t aware of any great opposition.” Yet “when we saw the wide range of failures,” Kennedy continued, “we asked ourselves: why had it not been apparent to somebody from the start? I guess you get walled off from reality when you want something to succeed too much.” The invasion was an embarrassment to the United States, and in those Cold War days, it pushed Cuba closer to the Soviet Union.

In the many years since President Kennedy spoke at Yale, silos in which unchecked opinion can find refuge have become both ubiquitous and more easily accessed; they act as echo chambers that reaffirm beliefs in real-time. Within these silos, speculation travels great distances without scrutiny. And the spirit of discord between these silos discourages the honest exchange of ideas across them. In short, clinging to our circles of consensus has grown more comforting – and questioning them, more difficult.

I encourage you to reject that comfort, because a willingness to explore new ideas is what makes all the difference. You know this perfectly well, I realize. The diversity of academic experiences available here at Yale ensured that you were not limited to learning from those who already shared your outlook. Indeed, President Kennedy chose to speak of such matters at Yale “because of the self-evident truth that a great university is always enlisted against the spread of illusion and on the side of reality.”

Another social psychologist, Mark Leary, who recently retired from the faculty of Duke University, closely examined the intellectual humility I seek to nurture in higher education generally and in you today. His review of this attribute – a recognition that “one’s beliefs and opinions might be incorrect” – reveals that it is associated with gratitude, altruism, empathy, and more satisfying relationships. Intellectually-humble people are more likely to be forgiven by others for their mistakes.

As extremism, polarization, and gridlock plague our politics at a time when pressing challenges call on us to harness our shared humanity, Professor Leary details equally substantial advantages of intellectual humility for society, including “lower acrimony that is based on differences in beliefs and ideology…[and] greater negotiation and compromise.”

Now, when we first met four years ago in Woolsey Hall, I described a series of obligations that would accompany your Yale education, including the responsibility to be constantly curious – and to listen carefully to others. At that 2018 Opening Assembly, I encouraged members of this class to remember that “you have come to Yale because you don’t know everything – not yet.”

Now, even as you prepare to depart Yale four years later, I will again declare that your acquisition of knowledge is unfinished. You’ll leave Yale despite not knowing everything. The transformative power of liberal education lies not in a promise to teach you everything but in the preparedness to meet presumptions – including those we harbor ourselves – with a healthy measure of doubt. It lies not in the ability to answer but in the audacity to question.

As graduates, it behooves you to carry forth the inquisitive attitude you have forged here at Yale into the world; to carry forth your insistence on pushing opinions – including your own – beyond the confines of comfort; your resolve to strengthen your reasoning through personal investigation and civil discourse.

In thinking of these trademarks of the academic enterprise, I am reminded of a dictum from Rabbi Moses ben Maimon, the great medieval philosopher known as Maimonides. In his introduction to Pirkei Avot, the Ethics of our Fathers, Maimonides urges readers to “accept the truth from whoever speaks it.”

Indeed, wisdom is rooted in this willingness – this responsibility – to entertain ideas brought to you by others. To listen carefully. To think critically. To challenge your views – and then to change them when the discovery of truth demands it. As Justice Sonya Sotomayor said recently, “It is, I fear, too easy for people to fail to listen when what they’re hearing is different than what they think.”

As we know, engaging with those who hold profoundly different perspectives threatens not to betray our beliefs, but to broaden them. Listening to that with which we may disagree is an act not of conciliation, but of fidelity to truth. And admitting what we got wrong is no sign of failure, but a necessary step toward knowledge.

The mark of a great education consists not only of the new frontiers of knowledge we reach, but of the existing viewpoints we reconsider; not necessarily of the understanding we gain, but of the assumptions we shed. For only when we subject the “prefabricated set of interpretations” President Kennedy spoke of here at Yale to scrutiny, can we elevate our limitations into points of strength. Indeed, humility – that willingness to say we are wrong – enables us to scale otherwise unattainable heights in the lifelong pursuit of knowledge.

As Yale graduates, you are allegiant to truth. You know that breakthroughs are byproducts of the questions you raise, the conventions you dispute, the fallacies you uncover. But, also, the mistakes you own. You know that the “new ideas and solutions” I spoke of when we first assembled as a class four years ago – ideas and solutions to fight disease, alleviate suffering, and find justice – are made better when they endure the rigors of critical inquiry.