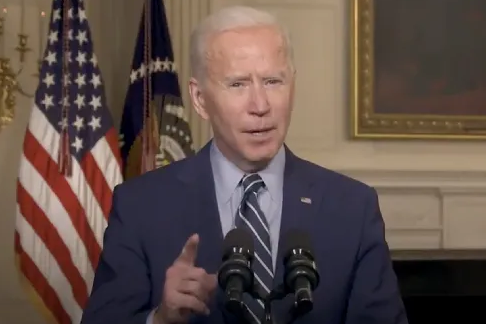 Today, we celebrate President’s Day. But the American story isn’t a story of presidents, it’s a story of the American people, a story of courage, character, strength and resilience, of facing the toughest challenges in overcoming them.

It was true when Lincoln saved the Union. It was true when Franklin Delano Roosevelt told us the only thing we had to fear was fear itself. It was when John Kennedy stood in the winter air and summoned the country to serve. It was true when Lyndon B. Johnson watched the images from Edmund Pettus Bridge on Bloody Sunday and went to Congress to guarantee voting rights.

Today, we’re living through another long, dark winter in our nation’s history – combating the deadly virus, joblessness, hunger, racial injustice, violent extremism, hopelessness, and despair. But I know we’ll get through this. I know better days are ahead. I know it because I know the story of the history of the journey of this nation. The American people have never, ever, ever let this country down, given half a chance.

So on this President’s Day, I promise you, as your president, my whole soul is in the work ahead of us. And if we do it together, as one people, one nation, one America, we will not fail. America never has.